The Bronze Age loom is a copy of the standing loom which has been used since 2500 B.C. The warp threads are vertical and are kept straight by stones or clay rings at the bottom. One out of three threads is connected to one of the round sticks in the middle with a loop so that they can be pulled out in turns and the shed be made. The weaving is a three shaft twill and is still being used. At a big picture you can see that the border is made in tablet weaving.

Swedish peasant loom from 1611 It is a bobbin loom with 4 shafts The warp threads are now horizontal. The loom is considerably faster than the bronze age loom. It set up a 2/2 twill with the slanting stripes like in cowboy trousers.

Double shed motion loom Lervad loom with 8 shafts from about 1930. By means of the treadle at the bottom, the shafts above the treadles, the hedles through which the warp threads and the sweeps at the top the selected threads are pulled up or down. It is thus possible to weave patterns known from damask.

The Millinge loom. About 1890 Hans Frederik Hansen in Millinge on Fyn started producing making a looms that automatically made the proper sheds, threw the shuttle with the weft and rolled up the final cloth. He produced 32 looms, of which only the two at the Flax Weaving Museum still exist. A boy who participated in the school weaving service told proudly that it was his great grandfather. 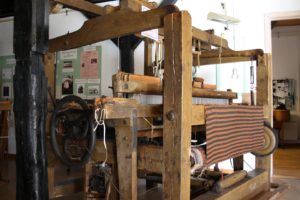 Jacquard Loom. In 1803 the French engineer Jacquard invented a superstructure above the looms. All the warp threads could be raised individually with a string system controlled by perforated cards. with one treadle the change from one card to the next and now any pattern can be woven. Drawings. Letters. Oak leaves.

Then it is time to enter the Machine hall, where the machine looms are found. Each loom has several series of punch cards to command the pattern and decide which warp threads are lifted. The shuttle flies through the shed every second and adds a number of threads per centimetre, and the pattern gradually appears on the finished material, which is being rolled on to the beam. A smart system stops the loom if a thread breaks, and then it can be repaired.

But first the chain has to be made.

From the 270 bobins the threads must be carefully gathered and placed in shed, so that they can be taken in the same order one by one. A chain can be 400 metres long and contains between 1500 and 5000 threads, so there have to be several times the 270 threads.

When there are enough threads they are moved to the boom of the loom. Precision is very important. 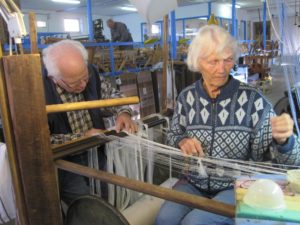 When the chain has been connected to the loom and all the threads have been attached to their individual threads to the punch card system it is time to weave.

The table mat loom comes from Germany and has also been functioning at Tommerup Weaving Mill. It produces 55 cm wide cloth as tablemats or napkins for the shop. All in the old patterns.

The damask tablecloth machine was produced by Oberlausitzer Webstuhl-Fabrik in Neugersdorf.
It can produce 155 cm wide material.

The damask table mat loom was produced by Atherton Bro’s in Preston
It produces 56 cm wide cloth as table mats or napkins for the shop.

The nameweaving machine was bought from Brabrand Textile Factory in 1958 and was produced in Germany It produces 60cm wide cloth provided witha name which could be that of a new bride. The standard is dishtowels with the name of ”Hørvævsmuseet”

The Punch card machine is very useful. The punch cards must be checked regularly for broken strings and uneven holes. At the back the machine can copy a bad card, and the new card will be sewn into the band instead. 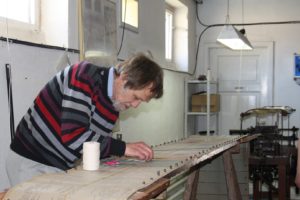